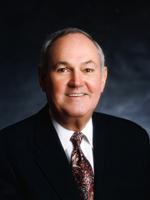 He was a leader, a visionary, and a friend.

While Cecil J. Picard lived a life devoted to bettering the education and quality of life for children in Louisiana, he inadvertently left a profound legacy that continuously inspires the work of staff members at the Picard Center.

Picard, a resident of Vermilion Parish, began his career as a teacher, coach and principal. During his early career in education, Picard was highly influential in the successful integration of schools in Vermilion Parish.

He then served 20 years in the Louisiana House of Representatives and Senate, where he spent much of his time on the Senate Education Committee and sponsored critical pieces of legislation for children with developmental disabilities.

In 1996, Picard was elected as the State Superintendent of Education. During his time as the head of the state education agency, Picard worked closely with the state legislature and governor to develop and implement Louisiana’s Accountability Program, which is still ranked as one of the top in the nation.

Picard’s time as superintendent was also marked by his creation of the state’s nationally acclaimed early childhood program, LA 4. While touring Louisiana school districts, Picard came face-to-face with the numbing child poverty in our state. Armed with the firm belief that the best way to combat poverty is to give at-risk children an early start, Picard, with the assistance of Dr. Billy Stokes and other key leaders, developed the state’s early childhood program. On the power of prekindergarten for at-risk youth, Picard noted, “Starting kindergarten without PreK is like starting 10 yards behind in a 100-yard dash.”

No matter where his career took him, Picard’s love for children and education could not be suppressed, as he was often found sitting on the floor, reading and playing with children.

Picard was also a firm believer in the power of high-quality data, and thus, was a fervent proponent of the development of the Loyd Rockhold Center for Child Development at LSU’s Health Sciences Center in New Orleans. Picard knew the importance of a university affiliation in order to utilize existing data and research to strengthen the Center’s research capabilities. However, as the Center’s mission evolved, it became evident the research mission of the University of Louisiana at Lafayette was a better fit for the cutting-edge research center.

In 2005, the Center was successfully relocated to its new home at UL Lafayette. This move was made possible by Picard, in concert with then-UL Lafayette President Dr. Ray Authement, then-Commissioner of Higher Education Dr. E. Joseph Savoie, and a group of legislators and friends.

Picard was diagnosed with amyotrophic lateral sclerosis (ALS), or Lou Gehrig's disease, in May 2005 and aggressively battled the disease for two years. After Picard’s untimely death from complications in February 2007, Mr. Loyd Rockhold, the Center’s largest philanthropist, and his family insisted that the Center be renamed in Cecil’s honor. The Louisiana Board of Regents and UL Lafayette graciously agreed to officially rename the research center to the Cecil J. Picard Center for Child Development.

In Cecil’s absence, the entire Picard family, from wife Gaylen and sister Gerry to sons Tyron and Layne, have been supportive of the ongoing growth and development of the Picard Center.

Cecil’s ultimate vision for the Center included lifelong learning, and while his battle with ALS did not allow him to see the completion of his vision, the Picard Center believes Cecil would be pleased with its recent focus on longitudinal studies, as well as studies on poverty's effects on families.

To forever honor Picard and his legacy, the new Picard Center building in UL Lafayette’s Research Park features a room of museum-quality memorabilia from Picard’s career, from teacher to state superintendent of education.

Picard’s support for the Center, passion for continuous improvement of the educational system in our state, and belief in Louisiana’s children will always be remembered and will continue to be a source of inspiration for our Center and individuals in Louisiana and beyond.