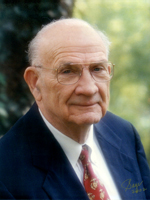 He dedicated his life to meeting the needs of children and knew no barriers to achieving his vision for Louisiana’s most vulnerable citizens.

Loyd J. Rockhold, born in 1922 in Jonesboro, La., held a deep interest in the well-being of Louisiana’s children throughout his 88 years of life. After serving in World War II as a master tech sergeant and earning his civil engineering degree in 1947, Rockhold spent any free time he had helping his community. He served as a Sunday school teacher, scout leader with the Boy Scouts of America, member of the East Baton Rouge School Board, and board member of the Arthritis Association of Louisiana.

His vision for improving the lives of children, particularly individuals with developmental disabilities, led him to establish the Special Children’s Foundation in 1975. Rockhold worked alongside Stokes and then-Superintendent of Education Cecil J. Picard to establish the Loyd J. Rockhold Center for Child Development in New Orleans. In July 2005, the Center relocated to its new home at the University of Louisiana at Lafayette, and with the support of the Rockhold family, the Center was renamed the Cecil J. Picard Center for Child Development.

Since that time, Rockhold and his family established two endowed chairs and an endowed professorship to ensure that the Center’s research in early childhood education and health would continue to flourish. The Loyd J. Rockhold Endowed Chair in Early Childhood was established to help the Picard Center partner with the education community on early childhood activities and continue longitudinal and annual research of the LA 4 prekindergarten program. Likewise, the Paula Chavers Rockhold Endowed Chair in Health Studies was created to look at school health and tie it back to Coordinated School Health initiatives, as well as to study childhood obesity and mental health issues among children.

Additionally, Rockhold’s foundation donated initial funding for the construction and architect fees for a new building to house the entire Picard Center operation in UL Lafayette’s Research Park. Construction on the new building was completed in September 2011. To forever remember and honor Rockhold’s impact on the Center’s work, the new building’s distance learning center is named after him.

Nicknamed “Rock” by Picard Center employees, he believed in living life to the fullest and walked on top of the Wall of China, visited Iguazu Falls, camped out in the Rockies in the snow and won a jitterbug contest at age 80.

While Rockhold is no longer here in body, his can-do spirit and concern for the state’s most vulnerable children live on within the Picard Center.